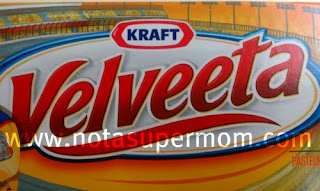 But I eat it anyway.

I don’t like Velveeta. It’s not food; it’s not cheese. It’s “a cheese-food product”.

I think it is most likely a by-product of some real food that the manufacture doesn’t want to waste and can’t sell for animal feed in the former Soviet Union.

Instead it is packaged it in a flashy yellow box and sold for five dollars a pound. That’s more than what I pay for real cheese.

But Velveeta is a comfort food for my sweet husband. His mom, rest her soul, made Velveeta taste good, so there are a lot of happy memories for him in that yellow box of foil-wrapped cheeze loaf.

Once a year, usually in the dark, new months when I will eat anything, I buy a box and make what our family calls The Dip.

The Dip is the most basic Velveeta queso recipe: one can of Rotel (a brand of chopped tomatoes and hot peppers) and a one-pound block of Velveeta.

The package recipe from the fine folks at Velveeta calls for cubing the cheeze and mixing it in a bowl in the microwave with the undrained can of Rotel.

Hot it up in the microwave, mix and eat.

It’s easier than any recipe on the Food Network (except for this one!*) and even a child can prepare it. A chubby, chubby child with arteries ninety-percent blocked by solidified whey by-product.

Our recipe for The Dip is a little different. My husband is squicked out by the texture of tomatoes, so I chunk up the cheeze, and throw it and the undrained can of Rotel into the blender.

Blast until smooth and creamy with nary a trace of detectable vegetable matter.

Portion some of The Dip into a covered container for the freezer. It freezes great. It will last forever in the freezer, literally. And when I say literally, I mean literally. I think the Vatican has some Velveeta dip in the papal freezer whipped up by Jesus. It’s in Last Supper-ware.

Heat up some of the fresh Dip on the stove or in the microwave and eat it with tortilla chips or use it as nacho sauce.

Also, it can top anything from baked potatoes to meatloaf. It’s like cheese gravy. Mmm, gravy.

So, there is Velveeta in the house and this Sunday we will be watching the Super Bowl for the commercials and stuffing our faces with The Dip. Go Packers and/or Steelers!

If I think of my sweet mother-in-law and tear up who could blame me. For eight bucks in Velveeta, Rotel and off-brand chips, I’ve made her baby boy very happy. Blessed are the cheese makers.

*If you can’t see the whole recipe on foodnetwork.com, it’s for chocolate. Just a plain bar of chocolate. The comment section is hilarious. Scroll down a bit to see it.

Making anything special or delicious for the game? Who are you rooting for? Let me know in the comment section.