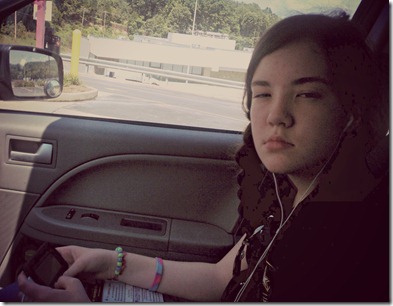 Much like an Olympic gymnast receiving a silver medal, my teenager daughter is hard to impress.

She’s half a grown woman who knows it all, and half the little baby I called Daisy who wants to hear the lullaby I sang to her.

Moving into these in-between years has been tricky, to put it mildly.

Luckily, I started talking to her about the changes she could expect from puberty years before puberty started. As soon as she was curious about the difference between her body and mine, I started explaining things simply, in a way that was appropriate for her age. She’s still not too happy about my stretch mark explanation. Not my fault!

Having walked three kids so far through puberty, here are some of my best tips.

With some girls having the first changes as young as eight, and even starting their periods as young as nine, you cannot wait until double-digits to start this conversation. You will do her a disservice to wait too long. She’s going to hear it somewhere. It should be from you first.

Meet her where she’s at.

Keep the info simple and a good fit for where she is at with her emotional maturity. You can freak a kid out with too much too soon. It’s a fine line. Look to her cues like wide eyes, saying “gross!” over and over, or putting her fingers in her ears while repeating “la la la, I can’t hear you”.

Don’t announce that you are going to “have a talk” and drag out the film strips and the dictionary. Look for opportunities when you are alone and relaxed to have a conversation that grows organically. I especially like talking in the car. They like not having to make eye contact with you, and they can’t escape, unless you slow down. If that happens, remind them to tuck and roll.

Once is never enough.

Think of this as being a long series of conversations and not a one-time Talk. Sorry, you are going to be talking about this for a while. You should be her safe place to get correct information. No pressure.

There’s no such thing as a stupid question.

Believe me, you will be shocked at what she knows and what she doesn’t know. Please, save your giggles for later. There was a time when you weren’t quite sure about all this either.

I’m glad my daughter and I have a relationship where we can talk openly about her period without embarrassment. I was having lunch with my parents today and mentioned I was writing about U by Kotex for Tweens. I thought I’d have to perform the Heimlich maneuver.

I think it’s a great thing that my daughter and I can talk about what used to be considered a distasteful conversation or even a secret. I’ve met so many older women whose first period was a surprise. Like, a total surprise. They thought they had cancer or were dying. That’s just sad.

If you need other helpful hints for talking with your daughter, go to the Kotex website. You (and she) can learn facts about puberty and other ways you can start the conversation. The U by Kotex for Tweens site is specially geared for younger girls who’ve started or are about to start puberty. It’s been very helpful for me and my two girls.

I wrote this review while participating in a Brand Ambassador Campaign by Mom Central Consulting on behalf of U by KotexTween and received products to facilitate my post and a promotional item to thank me for taking the time to participate.

Please note, everything I say about my daughter is with her full permission. She has final say on everything in this series. And she doesn’t usually give me side-eye.