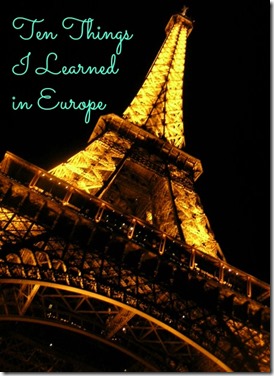 When I was sixteen years old, my Latin teacher organized a summer trip to Europe. I really, really wanted to go. I suppose I didn’t think too much about the fact that we were pretty poor. Divorced, underemployed mom and four teenage kids? Yep, poor.

I’m still grateful that my mom took out a small loan from the bank to send me. For two weeks in June, I’d tour seventy-five European countries and principalities.

That trip was a turning point in my life. Here’s what I learned:

Although our tour practically went through West Germany and Portugal on the same day, I had a wonderful experience in Europe. For a young girl from Tennessee who’d only been in an elevator twice, it was a transformative experience. I’ll always have my memories, and a small handbag from Paris. Thanks, François!

blog hop on Transformative Travel. Click the links below to read other posts on the topic by much better writers.