I think I’m a naturally selfish person, but I want to be a giver. And I want to raise my four kids to be people who give more than they take, both with their hard work and their money.

It’s never too early to teach your children to be charitable. One way is to divide any pocket money they earn into portions where they spend, save and donate.

I like to let my kids make their own money choices, even if I don’t agree (unless they want to buy something I don’t allow in my house).

Children need to make money choices when they are young. Even if it’s a mistake, it’s a small one they can learn from. Buying a cool toy that falls apart is better than buying a cool car that’s too much for the budget.

But, giving is rarely a mistake It makes your kid feel empowered, like they are doing good in the world.

I had an opportunity from the Clever Girls’ Collective to write this sponsored post reviewing the charitable website MembersUnite.com.

I signed up on Members United, and looked around: 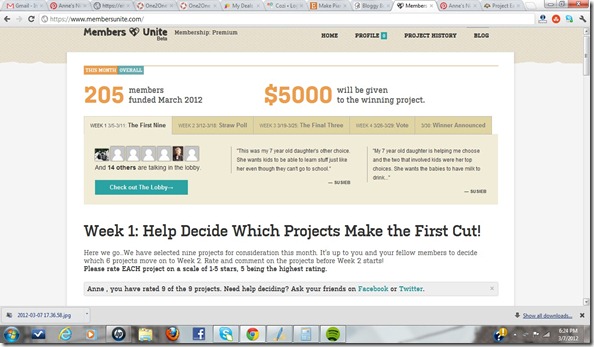 The premise of Members Unite is that each month you make an automatic five dollar donation. The first week of the month there are nine charitable propositions. Members vote and narrow the choices each week. At the end of the month the winning charity receives a lump sum donation.

My girls and I had fun reading the nine contenders for this month. Some were whimsical and sweet (having a thousand helium balloons in the park in New York City) while others were life-and-death serious, like milk for malnourished babies. You rate each on a five-point scale the first week. The top six move on to the second week’s straw poll.

We especially like the milk for malnourished infants in South America and the fresh fruits and vegetable charity for impoverished women in Chicago.

There was a proposal for training rescue dogs for soldiers with PTSD. We liked that one a lot at first, but in the details we saw that only two dogs would be trained. The girls decided to rate the baby milk charity higher.

My girls loved reading the details of each proposal and agreeing how to rate each. I loved seeing them thinking critically, coming to a consensus and making a charitable choice. 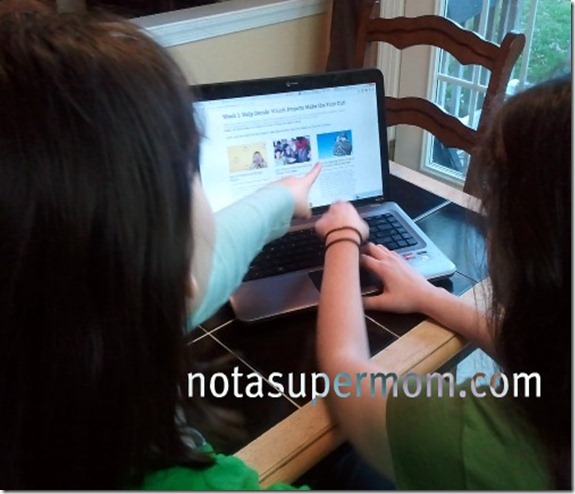 I’ve put them in charge of making sure we log in each week to see the progress of our favorites. Also, we’ll leave comments in the Lobby area, hoping to influence other givers and give our favorite charity a boost.

There is an initial fee of $25 plus the $5 donation for each month you are a member. Members United claims every penny of your monthly donation goes directly to that month’s winner. The initial fee is the only part that take to run the business. I thought their FAQ page was very helpful in answering any questions.

Check out Members United with your kids. If you sign up, let me know in the comments, so I can give you a virtual hug. My girls and I are “notasupermom” over there, so you can see our comments and see if your kids agree with us.

I think it’s a great way to get your family making active choices for charity for less than a fancy drink at the coffee shop.