Last weekend my teenage daughter and I went to Washington, D.C. as guests of DiscoveryE (and I received some compensation as well) to see the annual Future City ® competition national finals. Some of the most talented sixth-, seventh-, and eighth-grade students came from all over the country.

This year’s theme is Waste Not, Want Not, and challenged the participants to imagine creative solutions for the Four R’s of waste management, Reduce, Reuse, Recycle, and Rot. 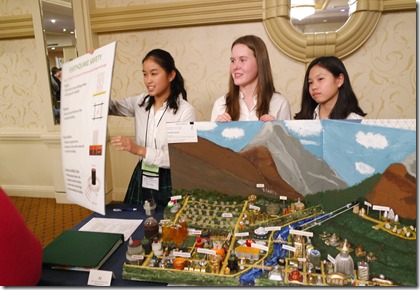 In local competitions, more than 40,000 students from 1,350 schools in 37 national regions, planned and exhibited their Smart, Green future cities. The top teams from each regional competition came to D.C. to compete for the top prize. Winners received a trip to U.S. Space Camp and $7500 for their school’s STEM program.

Since last summer, each team of about five students paired with a teacher and another mentor, usually an engineer, to design and build a complex, miniature ecosystem. We saw amazing tiny cities built on rotating platforms, with even the “underground” space utilized for smart waste management. The team from Houston even had a working tube system that whisks away waste to a disposal system. Each team had learned about engineering and design, as well as project management in a more real-world environment.

The teams seemed to get on well, speaking very clearly and passionately about what they had learned and what potential future jobs they now might consider. One young woman learned about how patent lawyers help engineers register and protect their creations, and said that sounded like a fit for her personality and interests.

I spent a lot of time talking with the Pittsburg team. Their fictitious Future City, Agala Kadama, was a design for the area of Nepal hard hit by recent earthquakes. Not only had they designed quake-resistant dwellings, they also came up with in-ground devices that would help absorb and mitigate some of the seismic energy.

Before I went, I thought Future City was a competition for girls in STEM, but is open to both boys and girls in middle school. I saw about equal representation between both genders.

One of the new regions this year was China, making this now an international event! The young men from Changdu did an impressive job, both with their project and with presenting it in a second language. Since almost all the American students created cities that were in other countries, it was a good reminder that the future of engineering is international.

The best thing I saw at the Future City competition was young students, not yet in high school, working together as a team, dreaming up new ways for living better, and making tomorrow a cleaner and greener place. For children to be able to compete, adult volunteers are needed. If you are a teacher, scout leader, or an engineering professional, please look into DiscoveryE and see if you can help build a team of students who can’t do it without you. Learn more at FutureCity.org. Enrollment for the 2017 competition season opens soon.