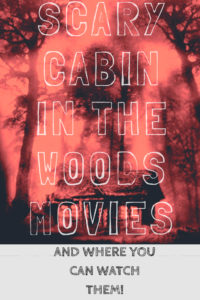 I was never a fan of scary movies when I was growing up. In the 80s they were all slasher sequels and cheap gross-out films. I did see The Shining at a friend’s house when I was in sixth grade. (What were her parents thinking? #judging)

I remember when I was twenty and home sick from work accidentally turning the channel past the original Night of the Living Dead. In those pre-internet days, I wasn’t familiar with it. For a scary movie novice, it was petrifying. Even now it scares me a little.

I’m not sure when the switch flipped for me, but I think it was around the time The Walking Dead started. It was the most frightening thing I’d ever seen, but somehow comforting. No matter how bad my life was, at least I wasn’t fighting for existence in a Zombie apocalypse! (I’m an optimist.)

Some of my favorite movies to watch around Halloween are the Cabin-in-the-Woods type. I grew up on top of a mountain in the middle of nowhere, so I think the fear that comes from being isolated and far from help in times of danger strikes a chord with me.

Here are some of my suggestions for what to watch in October, or anytime you want to watch this genre. Also, I’ve included where you can see these films if you want to stream them on Netflix, Hulu Plus, or Amazon Prime. Some links are affiliate links.

Cabin in the Woods

Duh, what else could I start off with. I saw this in the theater the day it opened so I would be surprised.
This movie has two distinct parts, and I won’t ruin the before and after for you. Just enjoy the pre-Thor Chris Hemsworth of it all
Where to watch: Amazon and iTunes

Not nearly the first in the genre, but one that still charms with its elaborate practical effects and dark humor. Also, a young Bruce Campbell doesn’t hurt.
Where to watch: on Amazon as part of a Starz subscription, or purchase on Amazon.

What? Another one? Yep. But it’s a different movie, sort of. It works a bit both as a remake and as a sequel. This 2013 version also has friends discover the Book of the Dead that needs to possess five souls to release the Abomination.

Where to watch: rent or buy on Amazon.

This is the original that inspired a slew of sequels. Friends go to a cabin. Ah, the great outdoors! Except this cabin is near water that gives you a “horrifying flesh-eating virus.” This is one of those movies where it’s fun to yell at the characters not to do stupid stuff before they inevitably do stupid stuff.

Where to watch: Free with subscription to HBOgo or HBOnow subscription, or buy on Amazon or iTunes

An update of the original by Eli Roth, so it’s going to be super gross.

Where to watch: Amazon and iTunes

Two idiots are under pressure to finish a horror script, so they go to a writer’s retreat in New York City. Just kidding–it’s in a cabin in the woods. And there are real zombies there.

Where to watch: Rent or buy on Amazon or iTunes, or free on Amazon with a Starz add-on subscription.

Why would you go back to the cabin where all your friends were possessed and killed by demons summoned by a skin-covered book? Why not?

Where to watch: Rent or buy on Amazon or iTunes

I know some people don’t like subtitles, but this movie has zombie Nazis! Worst. Ski trip. Ever.

Where to watch: Netflix, or rent or buy on Amazon. Free on Amazon with subscription to Shudder.

If you’ve ever thought you’d bug out to your rural cabin to wait out a pandemic, the zombie apocalypse, or the return of wide-legged jeans, this movie will make you think twice.

Watch via Netflix DVD (lol) or rent on Amazon.

Remember the “Jon Snow, you know nothing?” girl on Game of Thrones? That’s Rose Leslie, and in this movie things go terribly wrong for her and her new husband during their secluded honeymoon.

Where to watch: Netflix

This movie, based on a Stephen King novel,  is such a mixed bag. The scariest things are Morgan Freeman’s eyebrows and a creature known as a “crap weasel” that attacks during your most vulnerable moments (the crap weasel, not the eyebrows.) You’ll never squat in the dark again!

I’ll admit I only watch this movie because of my love of Damian Lewis, who does both his flawless-American and naturally-British accents in this one.

Where to watch: Free with Amazon Prime, or for a fee on iTunes

A mountain hermit has your sister’s body at his remote cabin. What could possibly go wrong?

Rent on Amazon or iTunes

A purposefully bad movie that will make you laugh, this is perhaps the finest example of possessed zombified beavers in cinema today. “College friends find their weekend of sex and debauchery ruined when deadly zombie beavers swarm their riverside cabin.” As they do.

Watch it on Netflix or rent on Amazon.

Nothing is more fun on a rural cabin holiday with friends than exploring a nearby abandoned mine.

Gregory Peck’s grandson is in this one. He’s pretty, but needs a bit more acting experience.

Watch it on Netflix

Two brothers must fight to stay alive when their dad (who was also the new Robocop) loses his marbles.

A bunch of spoiled British young people really have it coming to them in this one.

Swedish cabin. Something under the floor boards. It’s probably just a raccoon. This is an homage to the original Evil Dead movie, so there will be blood.

I think the title says it all. If I have to run, then hide, and then die anyway, do I really need to run at all? These are my good shoes.

Watch it on Hulu

Watch on Showtime or rent on Amazon or iTunes

I kind of love this silly movie with two bumbling rednecks and a whole lot of heart. The heart thing is both metaphorical and literal.

Watch it on Netflix, Hulu, or with an Amazon Prime subscription