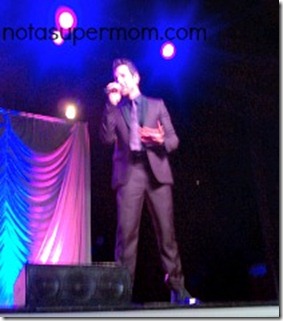 Last March I went to the Blissdom conference in Nashville, Tennessee.. It was a fabulous experience of education, encouragement, and entertainment.

At a luncheon we were serenaded by Chris Mann. Mann was at time a contestant on the second season of the television show, The Voice.

He finished the season as the final singer on coach Christina Aguilera’s team, and fourth place overall. It was really an amazing finish for a classically-trained opera singer.

While many people were surprised to see Mann go as far as he did, bloggers at Blissdom had known Chris Mann since he sang at the first Blissdom conference years before.

I attribute much of his success to the support of these women who have huge audiences with their blogs and a strong presence in social media.

This Blissdom was my first exposure to Mann. I loved his voice and was thoroughly charmed with how accessible and down-to-earth he was at the conference. He took pictures and signed autographs for everyone who asked. He stayed around much longer that he could have been contracted for—well into the nighttime party.

I was pleased to be asked to review Chris Mann’s first studio album, Roads. It has a mix of genres that really shows off his range as a vocalist.

There’s opera in Italian, big-band-crooner songs, a la Sinatra, and contemporary covers. I wasn’t quite sure at first about the melancholy cover of Need You Now, originally by Lady Antebellum. But after listening to it a few times, it really grew on me.

There are studio versions of songs performed on The Voice, like Cold Play’s Viva La Vida, and a duet with show coach Aguilera, Blower’s Daughter.

And Chris Mann’s first album would not have been complete without Ave Maria. Makes me tear up every time. For me, it’s up there with Josh Groban’s version. In fact, if you like Groban, you’ll like Mann.

Chris Mann is a rare talent in a world of singers who can’t really sing. Also, I hear he has a Christmas album out. I need to look into this for myself. My husband loves Christmas music and I get him a new album every year.

Roads by Chris Mann is available on Amazon or on iTunes. Learn more about Chris Mann on his website.

This is a review post from One2One Network. I was provided with a copy of the album and I am eligible for a prize drawing. All opinions stated are my own.