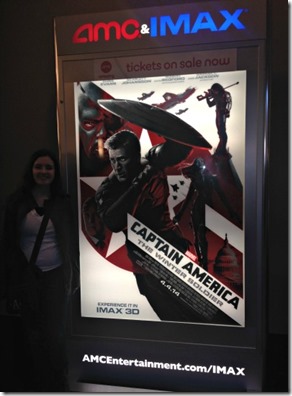 In CA:TWS, Steve Rogers is living in Washington, D.C. He meets fellow veteran Sam Wilson, a counselor for the Veterans Administration who helps young vets with PTSD. Their meet-cute is interrupted by the arrival of Natasha Romanoff, who picks up Steve for a job for SHIELD.

A French freighter, the Lemurian Star, has been highjacked, and a French-Algerian muscled guy in a sleeveless vest is de captain now.

From the start, the job seems not quite above board. Something is off, and Natasha, the Black Widow, and Nick Fury seem to have information they haven’t shared with Captain Rogers.

The freighter is the first series of action scenes in the movie. Great action–from Captain America’s jump without a parachute, to the mano y mano fight between the Captain and the highjacker, Batroc, whose name sounds like a Batman musical.

The plot gets more layered and complex, making Captain America question who is lying and if the lies make enemies out of allies.

In addition to the 70s-style political thriller plot that could be called Three Days of the Falcon, Steve Rogers is seeking his identity in the modern world. His friends are dead, he has to work hard to understand modern culture (Thai food, the song Trouble Man by Marvin Gaye).  Though when he is home in his really nice Georgetown apartment he still listens to old records from the World War II era, like the Harry James hit, It’s Been a Long, Long Time. Which it has been, for a man born in 1919, who has a 90 year old girlfriend.

Robert Redford plays a senior SHIELD official. It was strange to see him in his scene with Scarlett Johanssen, since I couldn’t stop thinking about them as their characters in The Horse Whisperer.

Redford is craggy, but the hair is still amazing. I’m ashamed my teen daughter didn’t know who he was. I had to whisper that he was the Brad Pitt of the 70s. Mental note to watch The Sting and Butch Cassidy and the Sundance Kid with her. 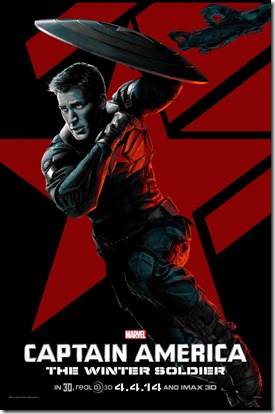 Lots of great Marvel references for the fandom, like mentions of classic characters and plotlines. You could tell who’d read the comics by the gasps and laughs during certain scenes. While I grew up reading by brothers’ 80s Marvel comics. I didn’t particularly like Captain America. I did like The Avengers, so I read plenty of storylines with Cap in them that way.

One of my favorite things about Captain America: The Winter Soldier was the really low levels of CGI. Action sequences with a lot of computer animation flout the laws of physics and have an uncanny valley effect.

Also, those over-processed scenes don’t age well and are laughable when you watch them a year or two later on home video. Think the Quidditch scenes from the early Harry Potter films. CA:TWS has natural, visually-seamless action effects for the most part. I hope this is a new trend in comic book films.

Sebastian Stan is good as the main action villain, the Winter Soldier. He’s the Captain’s equal and opposite. His red Soviet star mirrors the American star on Cap’s shield. Stan is masked through much of the beginning, and does well conveying either menace or confusion with his eyes. His Eastern European features are a good fit for a Cold War, Soviet-era bad guy.

I’m not sure if Captain America passes the Bechdel test, but it has a strong female lead in the Black Widow, and four great female secondary characters–the only one of whom is a romantic interest is ninety years old. I liked that the relationship between Steve Rogers and Natasha Romanoff was snappy with chemistry, but no real sexual tension. They had a professional rapport peppered with some almost sibling-like ribbing. A good choice, since Natasha’s on-trend arrow necklace hints she’s with Hawkeye.

Enjoy the cameo appearance by Danny Pudi from the NBC show Community, and the standard Stan Lee appearance. I hope they scan Stan Lee into a computer so he can be in every Marvel film forever.

As a Washington, D.C.-adjacent person, I loved seeing the D.C. locations throughout the movie, which according to imdb.com include the Jefferson Memorial, Lincoln Memorial, the Smithsonian National Air and Space Museum, the Capitol Building, the National Mall, Occidental Restaurant at The Willard Hotel, the neighborhood around DuPont Circle and the Theodore Roosevelt Bridge.

The plot works even if you aren’t a comic fan or haven’t seen the other movies in the series. You might miss out on the “hey, that guy” of it all, but everything should still make sense. 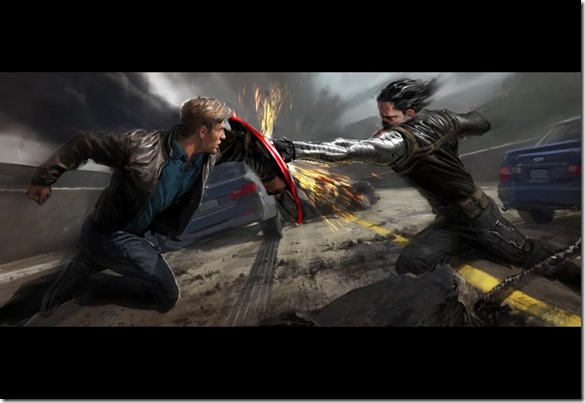 There are two extra scenes in Captain America. One after the top credits is the set up for the next film. If you saw the recent King Kong movie or watch the television show Dracula, you’ll recognize German actor Thomas Kretschmann. He plays a certain Baron of the von Strucker persuasion. That’s some old-school Marvel! The HYDRA leader will feature in the upcoming 2015 movie, Avengers: Age of Ultron.

He has two captives: the twins, who fans will recognize as Wanda Maximoff, the Scarlet Witch, and Piotr Maximoff, Quicksilver. Don’t expect to see them interact with their dad, Magneto. That character is owned by another franchise. The twins seem well cast with Elizabeth Olsen and Aaron Taylor-Johnson.

The final scene is a brief flash of the Winter Soldier at the Smithsonian. You have to really work to see it because the technical credits take an hour, so the theater staff is already sweeping popcorn from under your feet.

Catch the Bible verse on Nick Fury’s grave? It’s "The path of the righteous man is beset on all sides by the inequities of the selfish and the tyranny of evil men.” You may also recognize Ezekiel 25:17 as a favorite of Samuel L. Jackson’s character from Pulp Fiction.

Can Samuel L. Jackson be in every movie and commercial from now on? Even when he shows Nick Fury’s gross milky eye, he does it with style.

This movie has style, and I think it’s worth the price of a theater viewing if you are a fan of the franchise or any of the stars.