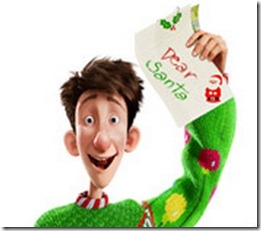 My younger daughter and I went to a sneak peek of the new animated, 3-D, family Christmas movie Arthur Christmas.

Arthur Christmas is about the sweetly incompetent younger son of Santa. We learn the Santa gig is a dynasty stretching back to the original Saint Nick. The job passes down from father to son every seventy years or so.

The current Santa, (Malcolm. Santa’s name is Malcolm.) has been Santa-ing since 1941 and now he’s pretty much phoning it in. The early scenes of the present delivery done from the flashy “sleigh”, the S-1, is amusing. Less magic and more like a military strike force.

There’s a Hurt Locker situation when Santa activates a noisy toy, risking a “waker”, or an awake child.

The real man behind the elves is Santa’s older son and apparent successor, Steve. Hugh Laurie is the voice of Steve, a modern military man with a goatee shaped like a Christmas tree and a commando jumpsuit.

Steve is all about efficiency and is willing to accept a present delivery success rate of 0.0000000000082 percent.

Even Santa is just too tired to make sure an undelivered present makes its way to little Gwen in Trelew.

Sweetly bumbling younger son Arthur (voice of James McAvoy) is relegated to the letter-answering department. He’s the one who promised Gwen in Trelew that Santa is real.

The movie is a little slow to start, but really gets going when Arthur and Grandsanta (voice of Bill Nighy and my favorite character) get together the old steampunk sleigh, Eve, and descendants of the original reindeer: “Dasher, Dancer, Prancer, Bambi, Dave, you with the white ear, you and you.”

Arthur, Grandsanta and efficient wrapping elf Bryony have an unintentional around the world adventure wreaking havoc on the way to Trelew.

Trelew, Cornwall, England. Not just the first Trelew that pops up on the GPS.

The movie is in 3-D. Usually I find 3-D movies too dark and the glasses give me a headache, but I had no trouble with this movie. The worst part (or best, depending if you’ve been through puberty) was a pre-movie music video in 3-D of Justin Bieber singing “Santa Claus Is Coming To Town”.

If you are a fan of Aardman Animation studios and their brilliant Wallace and Gromit and Shaun the Sheep, I think you’ll like this movie. Keep an eye out for a hat-tip to Shaun the Sheep.

Arthur Christmas has that classic dry British wit. It never talks down to the children and never has the winky-nudge adult irony that Hollywood animation has.

The rating is PG for “some mild rude humor” but I couldn’t tell you what that was. I noticed no bad language, sexiness or scary situations. And it was blessedly free of toilet humor that is in so many kids’ movies these day.

While I laugh as much as anybody at toots in real life, I’m reluctant to pay $13 a ticket for the privilege. Fortunately, Arthur Christmas is a toot-free movie. And so much more. I thought it had a rather sophisticated plot about family dynamics and the disappointment of one person not being minimized by the satisfaction of many. Still, it’s not so complex that children can’t understand and enjoy it.

I asked my daughter her favorite part and she quickly answered the narwhal and the old reindeer in the cone. Priorities!