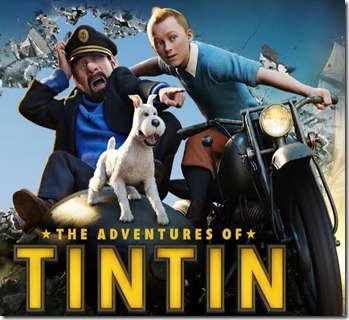 Saturday my son and I went to a prescreening of the new animated film The Adventures of Tintin.

I’ve never read any of the Tintin adventures, but my son read a lot of them in elementary school.

He said the books were hard to get from his school library and always checked out, like the Calvin and Hobbes books. That’s pretty impressive for comics written in the 1930’s and ‘40’s.

Steven Spielberg has been trying to make this movie since the early 80’s, after one review of Raiders of the Lost Ark compared it to the Tintin adventures. I had not heard that before I saw the movie, but I noticed the similarities while I was watching it. It has the pacing of the great serial adventures of the ‘30’s shown before the feature film each week.

Tintin is a young reporter. He and his dog Snowy start a non-stop adventure once Tintin purchases a model ship in the marketplace.

Tintin and Snowy explore an abandoned mansion, escape from a freighter at sea, fly a plane into the desert and team up with Captain Haddock to solve the mystery of a lost treasure ship.

The action is non-stop and rolls breathlessly from one adventure to the next. Even the flashbacks are exciting, with an amazing ship battle at sea during a storm.

The animation is motion-capture, so the characters move exactly like real people, but are proportioned like characters from the original Herge’ comics; heads, hands and noses are comically oversized. I found it much less off-putting than the same animation process used in The Polar Express.

I remarked to my son that Tintin looked like the first cartoon shot on location. It’s absolutely beautiful, especially the scenes in the desert and on the sea.

We were in a full theater with a very diverse audience. Everyone seemed to really like the movie, laughing, cheering and even clapping at the end. I did notice that kids under 5 seemed a little restless, but when aren’t they. Please, don’t take your baby to the theater. They won’t sleep—this movie is loud.

The action is mostly bloodless, although there is plenty of shooting, sword fighting and conking on the head. One man is shot and writes a clue on a newspaper with dabs of his own blood, but it’s not gross and didn’t seem to bother any of the small kids around me.

One character drinks, and heavily, but it is an obstacle he must overcome to succeed in the end. I think it is very strongly shown to be a negative, although it is played for comic effect at first.

I don’t remember any swearing, except for one use of “damn” used in a non-swearing way, if that makes sense.

There is no sexual behavior or innuendo. In fact, there is only one female character I noticed in the whole movie, unless Snowy is a girl.

I loved the movie, from the classic animation of the opening credits, until the final scene. I felt the way I felt when I saw Star Wars or The Matrix (not that the movie is similar in plot or tone to either of those movies), like I was seeing something new that was going to be big.

We saw Tintin in Real D, a 3-D process that doesn’t make me dizzy or give me a headache. The 3-D was utilized wonderfully and is a big part of why I think you should see this movie in the theater. It won’t be quite as good at home. The movie is also being shown in Imax 3-D.

The Adventures of Tintin is a five-star movie for me. This means I think it’s a must-see in the theater. It’s a kids’ movie that you will enjoy as much as your children do.

I’ve spent 20 years watching kids’ movies and most of them stink. This movie is one of the top five I’ve seen during my parenting career. It’s up there for me with the best Disney films of the last two decades. Clever script, good action, plenty of comic relief, and beautiful to look at.

I look forward to two more sequels. I hope Steven Spielberg keeps the same writing team of Steven Moffat, Edgar Wright and Joe Cornish. Also any movie where Peter Jackson directs the second unit and John Williams composes the score is going to be good.

Tintin was totally new to me. Now I want to read the comics. Are you a fan or would this be your first exposure? Let me know if you see it and what you think.

I got free passes the same way anyone could obtain them for an open screening. I have not been compensated in any way for this review and all opinions are my own honest thoughts.