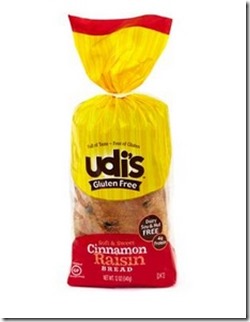 Udi’s sent me a big box of gluten-free baked goods to test for breakfast. I was not required to write anything specifically, and all thoughts and opinions are my own.

Though I’m not gluten-free, I’ve tried Udi’s products in the past and liked them.

The first to go from the Big Box of Udi’s were the “moist and tasty” blueberry muffins. I would not have been able to identify them as a gluten-free baked good. In my opinion, they were as moist an delicious as anything I’ve ever bought at the store.

The tortillas were made into breakfast burritos, the granola was eaten in a bowl with milk or stirred into Greek yogurt. The cinnamon rolls were devoured for dessert.

We’ve had fun with the bagels and cinnamon raisin bread, also. They’ve been toasted, made into French toast, and turned into bread pudding.

Here’s a quick recipe for individual bread puddings. This easy recipe can be multiplied to make as many servings as you have oven proof dishes. You could even make it in muffin pans, but I think that will reduce the baking time. 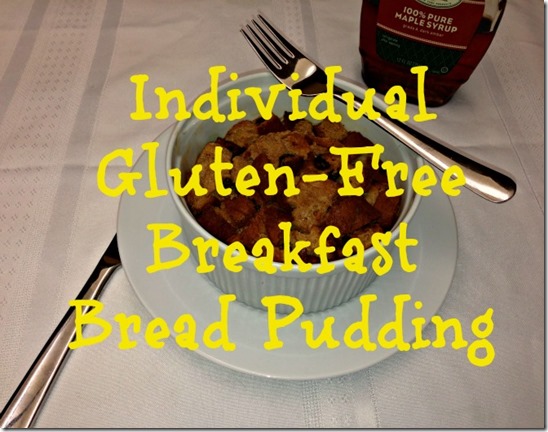 Prepare an oven-safe ramekin by oiling or buttering. Preheat oven to 350 degrees.

In a bowl, combine one egg, 1/3 cup milk, 1 tablespoon sugar, a dash of salt, a dash of cinnamon, and a few drops of vanilla extract.

Toss the bread cubes in the milk and egg mixture and allow the wet mixture time to soak into the bread. Pour into ramekin and press down to compress the bread. Bake in oven for 25 minutes, or until puffed and dry in the center.

Allow to cool for five minutes and serve with a dusting of powdered sugar or a drizzle of real maple syrup.

At blog conferences, I’ve been served the gluten-free meal when they ran out of vegetarian plates. Because of course that’s a substitute. The number one thing I hear from the gluten-free eaters at the table was, “It isn’t Udi’s!”

Udi’s products are, to my way of thinking, so good in maintaining moistness and texture in their baked goods, making breakfast an “Udi-ful” experience once again.