October 9 is a tough day for me.

I was in college and living at a house I shared with several other students. It was a particularly lovely autumn day. The leaves were just showing their fall colors and the air had that wonderful coolness that is such a relief after a Southern summer. I hadn’t been home long since my year away in Boston.

I remember being out in the driveway with one of my roommates when my mom pulled up. Mom and I talked for a few minutes and then she left to go on to our family home, about forty minutes away.

I watched her face closely as we talked, searching for an unspoken message. I detected nothing unusual. She seemed much more relaxed and peaceful than she had been for the previous two weeks.

I decided to go check on my dad. I knew exactly where to find him in town.

I pulled up in the hospital parking lot by my dad’s car, surprised to see him loading a balloon bouquet and a large hand-lettered Get Well poster into the trunk of his car.

Since the end of September these things had decorated my little brother’s room in the Intensive Care Unit. Not that he had been able to see them.

I was a little slow on the uptake. “Daddy, why are you leaving?”

“He’s gone. It happened about an hour ago.”

“I need to tell Mama. She was just at my house.”

My mother had come to tell me my brother had died and couldn’t do it.

On September 24th, for several different reasons, my sixteen-year-old brother took a shotgun and shot himself in the face. On October 3rd, he turned 17. On October 9th, he died.

The aftermath was as painful as those fifteen days, but for different reasons.

Some of the hardest things to deal with were:

I am still damaged. Broken and humbled in so many ways. Afraid of so much. Pained by certain songs, smells, memories.

Loving the family I made for myself since then, and being loved by my husband despite my weakness has been very healing.

I fear going through the loss my mother experienced, but her faith and strength every day since 1989 makes me hope I could summon the courage to get through devastating loss.

What helps me deal:

I’m still a work in progress. I’m too sensitive. I cry too easily. I’m difficult to live with this month.

I hope my brother is at peace. I love him very much. We were only two years apart in age, but in so many ways he was my own little baby. 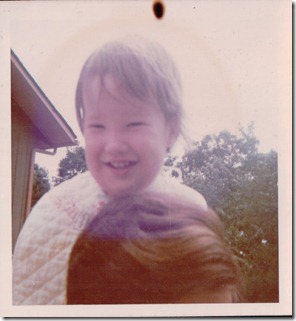 I have few pictures of him. When I did a google search on his name, I found a picture on FindAGrave.com.

It’s in a military cemetery and one day my father will share the same headstone, the same grave.

The stone is hard for me to look at, but I still have a copy on my computer hard drive.

I’ll keep that sadness to myself, but I will share a picture I do have.

He’s one or two, riding on Daddy’s shoulders. He’s wearing a quilted bib that has an embroidered clown on it. His face is faded from the opening in the frame.