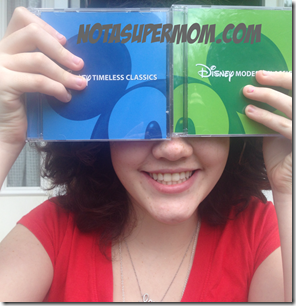 When I was seven I got the best present ever—a Winnie the Pooh record player and some albums of Disney music. My favorites were Pinocchio and The Jungle Book.

I listened to those records over and over. Hearing the music from those movies still have the power to transport me. Time well spent, because my kids are impressed(ish) with my knowledge of all the words to The Bare Necessities.

I think a lot about what Disney is best at. At different times I decide it’s Storytelling, or Marketing, or even Line Management. Now I have to put Music on that list. I always knew Disney music is part of what makes Disney movies great. I saw The Little Mermaid and Beauty and the Beast in the theater when I was a young adult and as soon as I heard the music I knew Disney was entering its new golden age.

My kids and I have spent hours listening to old favorites and making surprising new ones. My kids had never heard The Ballad Davy Crockett! Obviously a flaw in my parenting.

This is a sponsored post from One2One Network and Walt Disney Records. All opinions are my own.

Now you can bring home the new Disney Classics box set. It’s currently available for preorder on Amazon.com with a release date of November 11. If you are a super fan, the set is already on sale in the Disney parks.   .

There’s a special bonus for box set purchasers—a free instant download of a new medley of Disney hits by YouTube a cappella sensations Peter Hollens and Alex G. You can see the video of the song on YouTube.

Now you have a chance to win a box set of your very own in my giveaway below. This giveaway lasts until Friday November 1. Good luck!