My diaper days are over and I don’t miss it. Sure, I miss cuddles, toddler curls and especially watching Blue’s Clues, but I don’t miss the diapers.

One of the best shower gifts I ever got was a Diaper Genie. I liked it so much it was my standard baby gift (until I found a friend who makes divine baby quilts).

The only problem with the Diaper Genie is my love of nicknaming things. The water heater closet where we stored it for easy access is still called the Stinky Closet.

A decade later and the kids still call that closet the Stinky Closet. Even in front of guests.

Me: “Hey, hang up their coats, willya?”
Kid: “In The Stinky Closet?”
Me, hissing and giving the stink eye: “Yessssssss.”

I assure you it does not and never did smell bad, I just thought it was funny in the 90’s. Like me in a Rachel haircut.

Other funny things include what I find in diapers. Mostly undigested things, so don’t worry.

Diaper changes were like treasure hunts mostly because my kids used them for pockets. “Hey, what dis? I just stick dat dere. Dat a good idea. Mommy be proud!”

Someday I’ll give it to his future wife when she has their first future baby. Along with a shiny new Diaper Genie for their Stinky Closet. 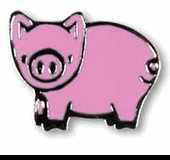 Don’t forget to comment here for my first giveaway running through Friday.