I didn’t get my first car until the summer I was nineteen. I’m a late bloomer in a lot of ways, and driving was one of them. I was more appreciative of that old sedan more than other kids would be of a sports car at sixteen. Nothing hones gratitude like going without.

For me a car of my own meant freedom and opportunity. I didn’t need to arrange for rides to work or school, and I could live away from home for college. I’d moved back home to Tennessee from Boston and missed the cheap and efficient MBTA system.

Now my boys are about that age and living away from home for the first time. They are back in the same town in Tennessee where I went to college, and subject to less-than-reliable transportation.

My sons are men: they want a car that is cool and has a great system for their electronics. Also, one of my kids is so directionally impaired he needs a GPS to point out east at sunrise. A built-in navigation system would be a nice option for him (don’t tell him I said that; like 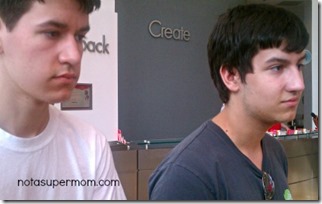 he reads his mother’s blog).

My sons are my precious children: I want them to have a car built with high standards for quality and safety. I would surround them in bubble wrap and fluffy feather pillows if I could, but not automobile manufacturer don’t offer that option yet.

I’ve been window-shopping the Kia Forte. The Forte EX has an “Infotainment” system that gives you hands-free control of your phone and music system. Also, there’s an optional voice-command navigation system so there’s no getting lost on the way to the library.

For my peace of mind, the Kia Forte has dual front airbags, side airbags in the front, and side curtain airbags for front and rear seating. And that’s the next best thing to bubble wrap.

I was selected for this opportunity as a member of Clever Girls Collective and the content and opinions expressed here are all my own.