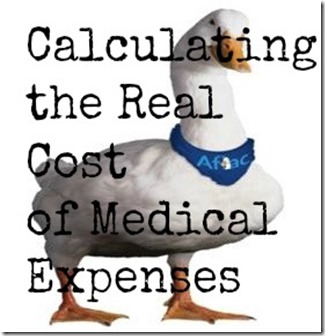 I participated in a campaign on behalf of Mom Central Consulting for Aflac. I received a promotional item as a thank you for participating

Several years ago I went into the hospital for a routine operation to remove my gall bladder. It was called a choley-rolly-ectomy, or something like that.

I was at home and recovering from an easy, uneventful surgery when I had a less-common complication that necessitated a rush for emergency treatment, hospitalization, and a two-week stay.

In a nutshell, most people have ONE bile duct between liver and gall bladder, while this mutant had two.

The worst part of the whole ordeal happened after I was back home and the medical bills started rolling in. Even with our average-good insurance coverage, the real cost of my illness and recovery knocked us for a financial loop.

I am so grateful my husband was able to take time off work without losing income. If he’d had to take unpaid time off during the months of my illness and recovery, things would have been pretty dire for us financially.

The number one cause of bankruptcy in America is medical debt. And, even with decent insurance most have a coverage gap. Stuff you think is covered by your insurance might not be, and you might not know until the time comes to write a check. A big check.

I used the Aflac Real Cost Calculator to predict the expense and reimbursement of common medical events for a woman my age. If I were to have a heart attack (statistically likely!), the cost of my treatment could be greater than the average income of working couple.

One thing I hadn’t considered with a severe illness was the normal costs of living, like the mortgage and car payments, that still need to be paid, even if no one in the house is making an income due to caregiving.

I know when the budget is tight it’s hard to pay for coverage that hope tells you you’ll never need. Sometimes hope needs to sit down and let practicality take care of business.

I think everyone has a friend or family member who didn’t have sufficient coverage in place and suffered for it when the unthinkable happened.

I hope you’ll take a minute to play around with the Real Cost Calculator. It will it give you a better idea of the true cost of accidents and injuries, along with some eye-opening facts about the statistically likelihood of those events.