This is a public service announcement on behalf of the Ad Council and the U.S Department of Transportation.

The holidays are a time to celebrate with friends and family. But it’s also a time to make sure you are keeping the ones you love safe. Whether you’re at a holiday gathering or a New Year’s Eve bash, many of our social plans involve driving.

According to the National Safety Highway Traffic Safety Administration (NHTSA) the period between Christmas and New Year’s typically has one of the highest rates of impaired driving fatalities.

Fatalities related to drunk driving are 100 percent preventable and the spike in buzzed driving around the holidays is especially alarming.

In 2014, 9,967 people were killed in alcohol-impaired driving crashes. These alcohol-impaired fatalities accounted for more 31% of the total motor vehicle traffic facilities in the United States.

Alcohol-impaired drivers were involved in 37% of traffic fatalities during the Christmas holiday period and 44% of traffic fatalities over New Year’s – making the winter holiday seasons one of the deadliest times to be on the road.
Buzzed driving can cost around $10,000 in fines, legal fees and increased insurance rates.

Ring in the New Year safely by planning ahead and designating a sober driver before you go out this year. If you have kids who drive, have a frank talk with them about choosing a designated driver.

This new PSA video, which was created pro-bono, asks you to think about a different set of consequences than any drunk driving ads you’ve seen before: the actual financial cost of being pulled over for driving buzzed.

Visit the Ad Council website to sign the pledge to not drive buzzed, and learn more about buzzed driving and the dangers that come with it.
On social media, follow the hashtag #BuzzedDriving to learn more. 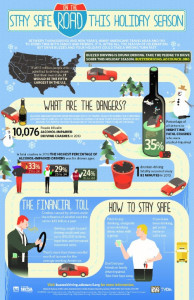