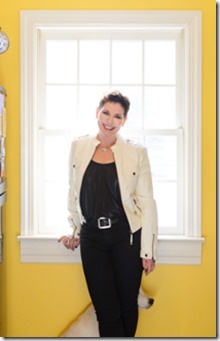 Last month I was sent a digital copy of a new book from syndicated humor writer Tracy Beckerman. Since I’d previously bought and read Tracy’s first book, Rebel Without a Minivan, I was really looking forward to Lost in Suburbia.

Rebel Without a Minivan is a compilation of Tracy’s columns, while Lost in Suburbia is billed as a “Momior” and has the feel of an autobiography in the style of a hot, Jewish Erma Bombeck.

It’s not too far a stretch to compare Tracy Beckerman to Erma Bombeck. I first heard of Tracy at the 2012 Erma Bombeck Writers’ Workshop in Dayton, Ohio. Tracy’s session on better humor writing was the buzz of the whole conference. She was like the prom queen of Dayton that weekend, except not pregnant.

I appreciated the narrative arc following the author from her fabulous job at a television station in New York City through her children’s births and the family’s migration to…the suburbs of New Jersey.

As someone born and raised in the South, New York and New Jersey don’t seem that different to me. Apparently, that’s like thinking there’s no difference in SEC football teams (Go Vols!), or sweet tea and tea in a glass you can add a sugar packet to yourself.

Once in New Jersey, Tracy has to leave behind cool hair and a chic wardrobe of all black for the land of minivans, mawl hair, and—worst of all—Mom Jeans.

You know what Mom Jeans are. They are high in the waist and roomie in the seat. They may have pleats and they most likely taper to the ankle. In the 80s we just called them “jeans”.

Can Tracy survive play groups with the mom who fakes her kids peanut allergy? Will she find a bathing suit that doesn’t make her want to commit hara-kiri in the dressing room at the mall? Can she ever be cool again?

I read Lost In Suburbia at night after my husband went to sleep, and almost woke him up several times with my chortling. There were also some snorts and a muffled guffaw.

In person, I laugh easily and heartily. I’m the lady you want at your presentation or home party because I’m engaged and expressive. When I read, it’s another story. I am very hard to amuse with the written word. If I say you made me laugh, that’s one of my highest compliments. (Saying “LOL” doesn’t count!) This book made me laugh. 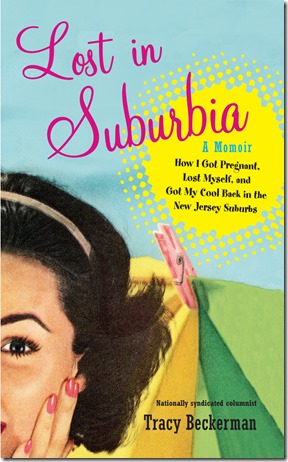 My favorite story was the tale of Tracy’s son’s bris. There was some confusion as to the completeness of the procedure because the Mohel, Tracy’s own brother, was sleepy from flying in on the red eye. That is not a euphemism.

I also liked Tracy’s story of how her mother kept a secret stash of forbidden junk food. I totally identified with that as the child of a mother who made us eat yogurt before it came with fruit or flavor, and whole wheat bread made from sticks and twigs. 70s whole foods were hardcore. All I wanted were Pringles and Oreos like the other kids had! Tracy feels my pain.

So, I enjoyed the parts of Lost in Suburbia that were familiar to me, and the parts that were like having a peek inside a stranger’s funny and dysfunctional house. Tracy is the real-deal funny and this book is bookshelf-worthy.

I consider Tracy to be a friend, but I wouldn’t give this book my highest recommendation if I didn’t think you would love it as much as I do.

Tracy Beckerman is on a tour to support her new book and may be in a library or hair salon near you soon. I’ll see her next at the Mom 2.0 Summit in California in a month, where I hope she’ll sign a book for me.

Would you like a copy of Lost in Suburbia? Just leave me a comment telling me what you’ve done to get your cool back after having kids. If you don’t have kids, tell me what it’s like to go to the bathroom without an audience. That must be nice, huh?