I’m pretty sure I am not autistic (although I have taken some Asperger’s self-diagnostic Internet quizzes that make me wonder). I am a victim of very rigid thinking.

Things were painfully black and white to me as a child. I loved rules and etiquette because it helped me know how to act around other people. What was frustrating was when other people didn’t follow the rules.

I could not wait to be a grown up. Grown ups must know and follow all the rules, so then things would be easy.

I was just reading an article today suggesting Supermarket Rules.   Good luck with that, hon.

For every official rule, a third won’t know it, a third will flout it because You Can’t Tell Them What To Do, and a third will stew in righteous indignation because the other two-thirds AREN’T FOLLOWING THE RULES.

I think having kids and being completely overwhelmed by motherhood helped make my black and white thinking a little more gray.

I had two exhausted and poorly behaved toddlers and a cart full of groceries at the check-out aisle of an unfamiliar store.

I was perplexed by the angry stares of those behind me until I noticed it. The sign that said “12 Items or Fewer”. (Yes, a grammatically correct sign. I’m surprised I didn’t see it.)

I was stuck. The clerk could have helped me out early on by asking if I knew what lane I was in, but I’m sure she was used to as many people just not caring.

I did the only thing I could do—I cried.

The people in line behind me became much more understanding. I hadn’t broken Rule Number 5, I was just a near-sighted, harried mother in an unfamiliar store.  I bless them for their kindness, when really I could damn them for not giving me the benefit of the doubt.

I continue to get my own lessons in why I need to give people the benefit of the doubt instead of seething at them in my head, ruining MY day and affecting them not at all.

In July, my husband and I took our kids to a Richmond Flying Squirrels baseball game (motto: Go Nuts!).

When the time came for the National Anthem, we stood and placed our hands over our hearts and sang.

A large group of youths in the rows in front of us stood and did nothing. A few turned around and stared at me as I sang. I was very irritated.

This is the South, son. Your mama raised you better than that. I gave them such a look!

A few minutes later I realized…the kids were French.

I should have know. They were all casually, but immaculately dressed. No tattoos. Great haircuts. Strange shoes. All fit and slender.  Practically under a billboard for “Not American”. 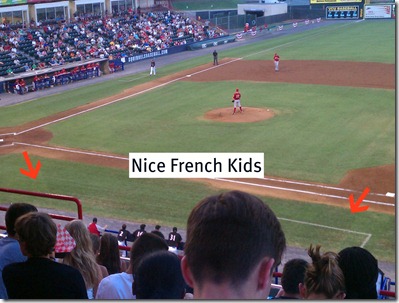 It was an excellent reminder for me.

You never know why that moron just sped past you on the Interstate. We did that when I was in labor.

You never know why that car didn’t stop at the cross walk. We did that on the drive to my brother’s funeral.

You never know why that lady’s kids are being brats. Mine have been, plenty, and for all different reasons that have nothing to do with my parenting skills.

So, please be kind to that next idiot who breaks a rule that is your pet peeve.

It very well could be me.

I promise to do the same for you.

Big congratulations to my Missoni large tote giveaway winner, Amy J.! Amy, I promise to get this in the mail to you as soon as possible.