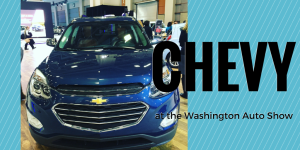 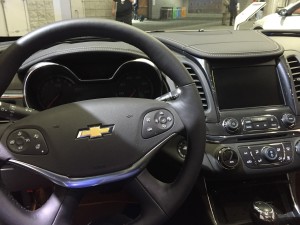 I was very happy to return to the Washington Auto Show for a second time with Chevrolet and She Buys Cars. I really liked working with them at this event. I never considered myself a “car person” until last year. I sat in a brand new car, sniffed that delicious aroma of new upholstery as yet untainted by dropped french fries, and I was sold.

Buying a car is personal. Our car is almost like another social media avatar. It communicates to the world how we see ourselves. Are we sporty, fun, practical? I know a lot of women about ten years younger than me would never drive a minivan like I did. And Detroit know that. A trend mentioned at the Auto Show was the crossover vehicle as the new “family car”.

For me, a woman just past the minivan years, the mid-range sedan is what I spent the most time learning about. Last year I asked a GM exec what women bought after they traded in the mini van. He suggested the Chevy Impala, and I gave him such a look. The Impala was the rental car you got stuck with fifteen years ago.

Sitting behind the wheel of an Impala now is a completely different experience. It’s come a long way since I last rented one in the 90s. Here’s a detailed review of the 2016 Chevrolet Impala that will tell you more than my vague “I like it!”

Another car I spent a lot of time checking out was the Chevy Malibu. Another car that was previously rental-grade, the new Malibu is targeting parents of teen drivers. Their Teen Driver package tracks driving data and reports it to parents. Also, the music system can’t be access until the driver’s seat belt is fastened. I hope a system like this is available in every new car someday! Read about the Teen Driver package and also be aware of how kids are already getting around the safety features.

I’ve been saving my favorite part of the Washington Auto Show for last. I got to drive a Chevy Volt! I’ve been intrigued with the Volt since last year, but just sitting in it on the show floor was not a magical experience. It seemed pretty plain inside and reminded me of the car I had in college, and not in a good way.

I was assured the secret of the Volt is in the driving, and they were right! I’ve driven a Prius and a hybrid Highlander before, but the Volt was so much better, in my opinion. It had a lot of pick-up (necessary when driving in Washington, D.C.), handled great, and made me feel like I was driving a sports car.

It was only 31 degrees out during my test drive, but the car warmed up fast, greatly helped by the heated seats and steering wheel. I’d wondered if an electric car didn’t drive as well in the cold, but I didn’t notice any problem.

Since the Volt can go for about 50 miles on a full charge before switching to gasoline power, most trips will be made completely electric. On a full charge with a full tank of gas (about 8 or 9 gallons) you could drive about a thousand miles before needing a charge or a fill-up!

My friend who has a Volt says that their nightly charging at home costs them pennies a day, and that they go for weeks without needing to gas up.

I think the Volt has come a long way and is making serious moves in the car market. It’s not just a novelty for first-movers and engineers anymore.

The Washington Auto Show runs through Sunday, January 31 at the Walter E. Washington Convention Center. Learn more about my day with Chevy at She Buys Cars. 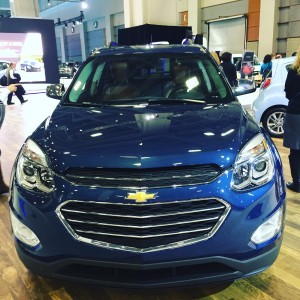